Agora Group is committed to observing the highest ethical standards, operating in accordance with the law, our internal regulations and external codes of conduct adopted by Agora S.A. as well as other entities of the group.

In 2018 Agora S.A. adopted a comprehensive system of ethics including Agora Code of Ethics, and implemented an internal whistleblowing protocol. As a part of these proceedings Agora conducted an ethics audit and introduced a confidential whistleblowing system and the function of Compliance Officer.
In 2019 a gap in the compliance system was identified, recommendations were developed and further steps were suggested and the process of building a comprehensive compliance system for Agora Group was continued.

In 2019 Agora adopted the following goals: 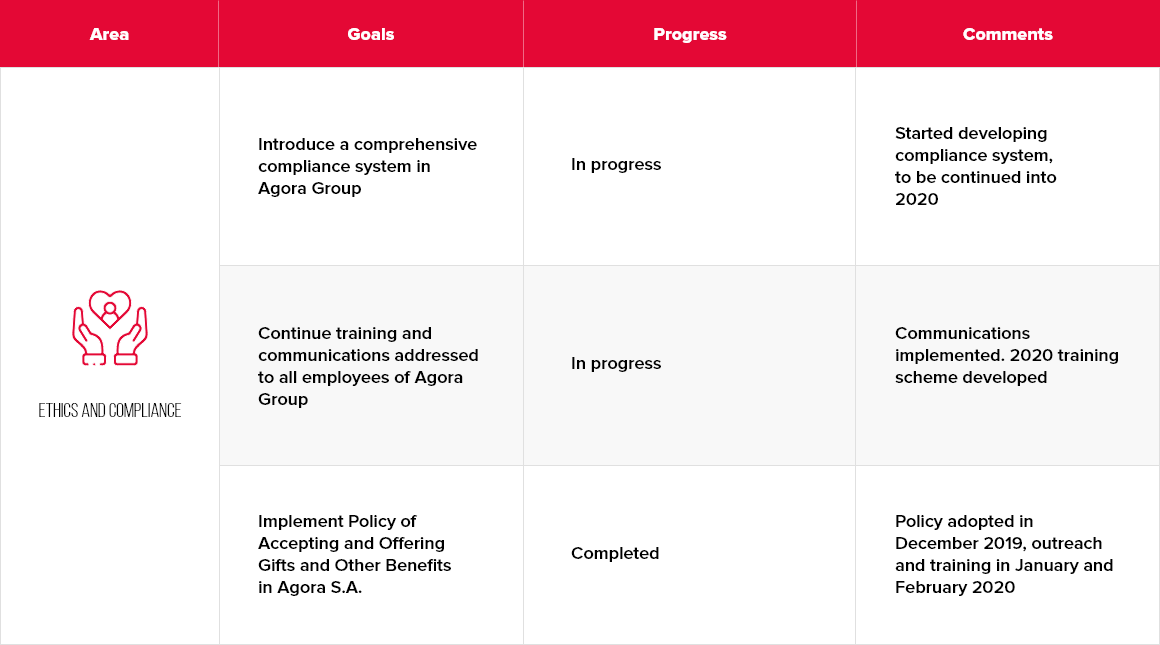 In 2020 Agora adopted the following goals: 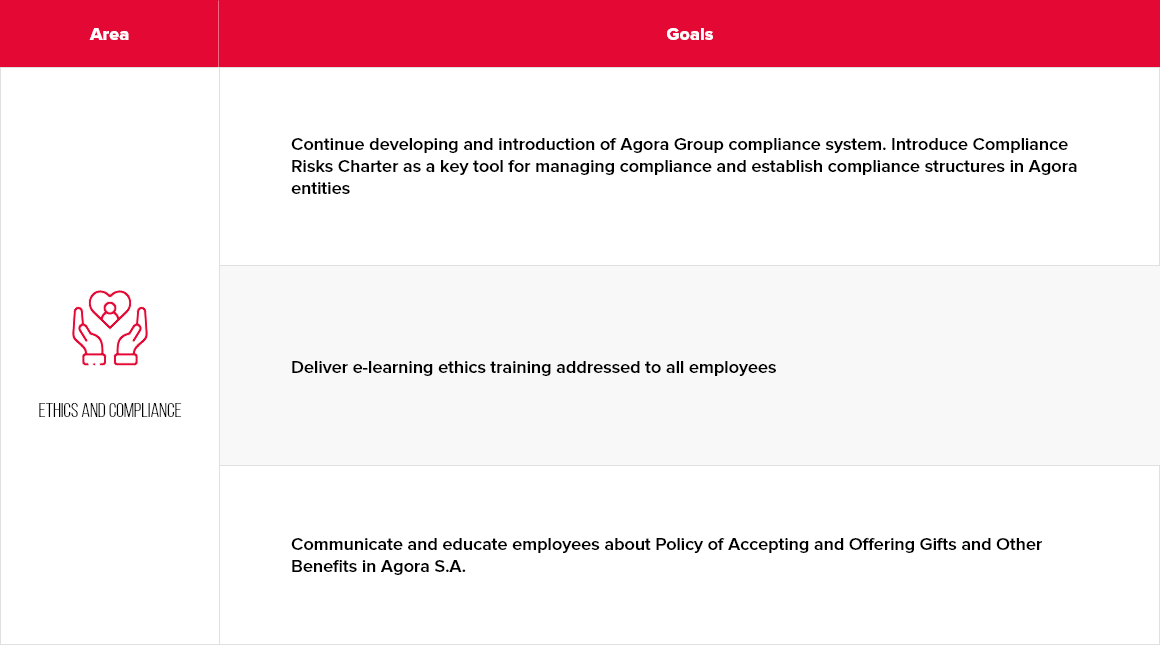 A comprehensive system of ethic was adopted by Agora S.A., comprising: Agora Code of Ethics, internal policies and regulations, external industry codes, Compliance Officer and a whistleblowing system. Communication and education of employees are two other elements crucial for maximum system effectiveness in this aspect.

Agora Code of Ethics is an internal document, addressed to all employees and collaborators of Agora. While the document sums up all previously adopted internal and external regulations in the areas of ethics and anti-corruption, its main role is to describe all principles and behaviours are encouraged and expected by Agora and those the company deems wrong or unacceptable.

Agora Code of Ethics is an internal document, addressed to all employees and collaborators of Agora. While the document sums up all previously adopted internal and external regulations in the areas of ethics and anti-corruption, its main role is to describe all principles and behaviours are encouraged and expected by Agora and those the company deems wrong or unacceptable. A set of indications and values, it is a manifestation of a responsible and transparent approach in the following areas, each representing consecutive section of the document:

Agora Code of Ethics applies to all: employees, collaborators, executives of Agora S.A., regardless of their function or positions.

Agora Code of Ethics specifies all principles that should be observed by Agora’s employees and collaborators in relations with all stakeholders; compiles key documents with detailed instructions for specific areas; describes the whistleblowing system, including the contact details of relevant individuals who can offer assistance in ethical matters as well as advice on who can help in determining whether an action is in line with the codes an values of the company, plus a glossary of key definitions.

Management Board of Agora S.A. issued a recommendation according to which all entities of Agora Group are advised to adopt Agora Code of Ethics.

The document specifies codes in the following areas:

Code of Conduct for Suppliers and Contractors of Agora is available online: https://www.agora.pl/odpowiedzialny-biznes#slide-etyka

As a part of the ethics system Agora introduced Whistleblowing System Protocol in Agora S.A. and Whistleblowing Processing Protocol. The documents specify that every report is approached as confidential and the whistleblower is provided special protection, as well as that every report is important and shall be processed, and addressed as quickly as possible. However, in especially sensitive cases the processing might last 30 or more days.

The following channels and forms of reporting cases related to workplace discrimination and mobbing are currently available in Agora:

Any report, question or suggestion, submitted via the portal, e-mail or Ethics Line, reaches relevant experts who remain in contact with the whistleblower. The system ensures the whistleblower’s anonymity and the correspondence is encoded and only the experts of Ethics Line can access it. The information can be passed to Agora’s Compliance Officer upon the whistleblower’s express permission. Ethics Line provides assistance to Agora in solving reported cases.

number of cases registered through Ethics Line In 2019

cases reported through Ethics Line in 2018

Twelve cases were registered via the Ethics Line most were suggestions (nine) and three were reports of misconduct in 2019. Some were reports that required verification and checking as potential cases of corruption, others were questions to which relevant answers were provided. Simultaneously, each case was directed to Agora’s Compliance Officer and Anti-Discrimination and Anti-Mobbing (5 reports). Reports relevant to workplace relations were described in the human rights and the workplace section of this report (five cases in 2019).

number of workplace relations cases reported and processed in 2019

Communications about Agora Code of Ethics and ethics system are intended to promote the principles and values adopted by the organization among the employees, collaborators and contractors or Agora. Communications are carried through various channels and forms: e-mailing, posters displayed in the workplace, newsletters and a dedicated sections in company intranet, training and non-standard activities.

New employees are introduced to Agora Code of Ethics at Welcome to Agora orientation training, 114 new employees in 2019.

One of the measures taken by Agora was analysis of gaps in the compliance system and develop recommendations for Agora Group Compliance System.

The project included regulatory compliance (compliance with the law) as well as compliance with self-imposed codes (good practices and industry standards). Analysis of key areas of operations was conducted for compliance risks, current procedures and internal regulations were reviewed to identify gaps, and therefore compare the system currently in place with legal requirements and good practices and to develop recommendations. The document was formulated by a multi-sectional compliance team (Legal Department, Compliance Officer, Corporate Communications, Management Board) and representatives of the entities of Agora Group.

In 2020 Agora will continue developing its compliance system, including the following:

In 2019 Management Board of Agora S.A. adopted Procedure for Preventing Money Laundering and Financing Terrorism. The document determines rules and procedures for preventing money laundering and financing terrorism. This way Agora executes its obligations under the relevant laws. The procedures are observed by all participants of the activities involved in providing accounting services for clients. The procedures are mandatory and apply to relations with all clients. Every employee and collaborator is obliged to know the document. To this end Agora organized training and information meetings for our employees.

Agora Group also developed a document that specifies corporate governance principles for Agora and limited liability entities that belong to Agora S.A. capital group (Agora holds directly or indirectly over 50 percent shares). Corporate Governance Rules in Agora Group were addressed to Management Board of Agora, Directors of business segments of Agora S.A. and Members of Management Board and Council, General Meeting of Shareholders of majority entieties and lawyers of the capital group.
The purpose of the document was to present:

Our priority is to conduct operations respecting the law and due diligence. We take every precaution to prevent situations that might lead to corruption, bribery or fraud. Agora Code of Ethics specifies regulations in this area.

Agora is in the process of developing Agora Group Compliance System. The system aims to introduce regulations aligned with the standards recommended for compliance systems in preventing corruption and protection of whistleblowers in WSA listed companies.

In 2019 one incident was reported in which one of former employees of Agora exceeded his competence and could gain access to personal information of his colleagues. The investigation that ensued included analysis of risks. All employees potentially threatened by the situation were invited to a meeting and preventive measures were deployed.

No incidents of corruption or fraud were observed in Agora in 2018.

In the case of Agora Group, advertising ethics is related to our role as an advertiser as well as media publisher. This renders the issue particularly important for all our operations.

Self-imposed industry regulations are particularly important in Agora’s core business, its media operations and responsibility in the advertising segment. Agora is committed to ensuring that the above codes and regulations are upheld to the stakeholders’ satisfaction.

We make every effort to ensure that the advertisements we publish comply with the law (including a ban on advertising gambling, alcoholic and tobacco products) and principles of good conduct.

Any advertisement, its form and content, should comply with relevant laws, rules of good conduct, programme line and / or the type of publication and with the codes observed by Agora as a publisher: Code of Ethics in Advertising and Code of Good Practice for Press Publishers.
Additionally, advertisements of higher risk or more sensitive products/industries are reviewed by Agora’s Legal Department.

CODE OF ETHICS IN ADVERTISING

Agora has signed Code of Ethics in Advertising - a standard of marketing communication recognized universally across Poland. The Code is a set of principles that should be followed by entrepreneurs, including especially advertisers and other legal and natural persons as well as organizational units without legal personality conducting advertising. The code is based on universally adopted ethical principles and on good practices, in particular on business ethics standards and ethical norms in marketing communication recommended by The European Advertising Standards Alliance (EASA).  CODE OF ETHICS IN ADVERTISING .

The code was developed by the Polish Press Publishers Chamber (Izba Wydawców Prasy - IWP) as a set of internal standards for the purpose of self-regulating publishers allied in IWP as well as other publishers that would join the organization in the future. The main idea behind the document is to protect the interests of readers and publishers against unfair market practices that go against recognized good practice code.

In 2017, Agora was Poland’s first publisher, through the Yielbird team, to introduce ads.txt standard. The ads.txt solution, developed by IAB Tech Lab, is the answer to two increasingly more widespread problems in programmatic advertising: domain spoofing and unfair resale of ad space in programmatic open auctions. The project is an example of the online publisher’s responsibility as follows relevant recommendations of IAB. More information

As a brand with a long journalistic tradition, Agora is committed to journalistic and media ethics. Freedom of speech, independence and reliability are important principles we uphold in our daily operations. Any content we develop is based in reliable and true communications. Reliable sources and transparency are crucial to Agora.

To supplement the industry code of values, Agora adopted self-imposed internal codes that focus mostly on journalism as a profession (Code of Journalistic Ethics and Code of Journalist) They are internal commandments for journalists and editors working in Agora’s media.
Agora SA has also adopted Principles for the selection of advertisements accepted for publication in Gazeta Wyborcza, magazines: Wysokie Obcasy extra, Książki. Magazyn do czytania and in digital publications (applications) and internet services of Wyborcza.pl group. The document lists all binding laws and internal regulations of Agora SA relevant to the selection of advertisements published in our media. The document is further complemented by a list of procedures and rules applicable to specific aspects such as: ban on gambling advertising, election adverts, etc.

Top
Dear User!
We want you to be comfortable while using our website. This is why, we try to match the available content to your interests and preferences. This is possible due to the storage of cookies in your browser and the processing by Agora S.A. (the administrator) of your personal data for analytical and statistical purposes. By continuing to use our website, without changing the privacy settings, you agree to the storage of cookies in your browser. Please remember that you can always change the settings of cookies in your browser as well as obtain additional information about the processing of your personal data and your rights from our  Privacy Policy.
Privacy settings
I agree